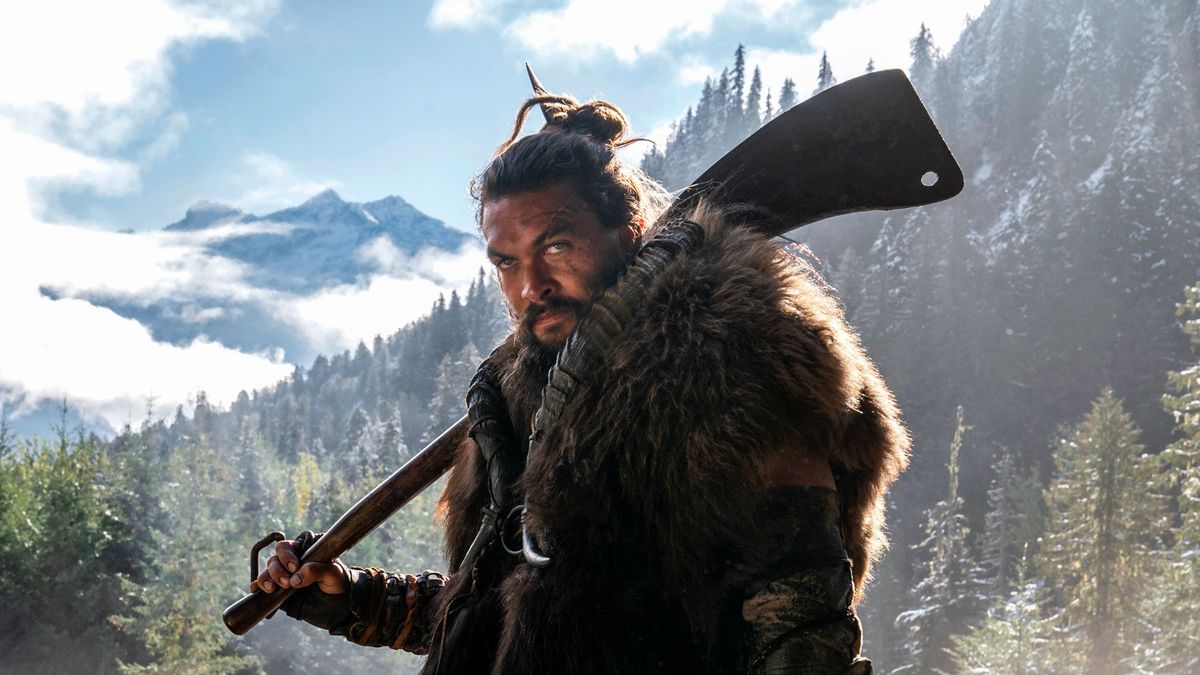 There is a whole lot of new stuff to watch this weekend, so if you’re in the mood for a good, long binge, this lineup of new movies and TV shows offers something for everyone. The streaming wars continue as Netflix, Hulu, HBO Max and other streaming services continue to drop endless entertainment options for viewers.

This weekend brings new seasons or episodes of popular shows, including American Horror Story, PEN15, See, Archer and Supergirl. There are plenty of series debuts, too, like the heist dramedy Unusual Suspects and the viral video thriller Clickbait. On the movies front, Vacation Friends brings the laughs, He’s All That updates a classic rom-com and The Witcher: Nightmare of the Wolf expands the fan-favorite universe.

And that’s not all: There are a ton of new TV shows and specials available on broadcast and cable. If you’ve cut the cord, just sign up for one of the best cable TV alternatives for access to your favorite channels.

Here are our picks for the new movies and TV shows to watch this weekend.

Season 10 premiere | Episodes 1-2 (TV-MA) | How to watch AHS season 10 online
Ryan Murphy’s anthology series is doubling down on the horror in its tenth installment. This season is divided into two parts — “Red Tide” and “Death Valley” — with the respective themes of sea and sand. How they are connected remains to be seen. “Red Tide” kicked off with two episodes that introduced the Gardner family.

Dad Harry (Finn Wittrock) is a writer struggling with a block, pregnant mom Doris (Lily Rabe) is redecorating their rundown shack in exchange for a free stay, while daughter Alma (Ryan Kiera Armstrong) frantically practices violin. They move to a seaside town where things quickly get super creepy. This is AHS, after all.

Double Feature is stacked with Murphy regulars like Sarah Paulson, Lily Rabe and Evan Peters, and adds newcomers like Macaulay Culkin into the mix.

Season 2 special | Episode 8 | Watch now
Nobody captures the cringe factor of adolescence like the hilarious PEN15, which delivers a special animated episode. It’s a result of the pandemic, but ends up being a great vehicle for exploring typical teen insecurities. The episode sees the animated Maya (Erskine) and Anna (Konkle) on a spring break road trip to Florida with Anna’s dad. They start off excited by the vacation, but things take a turn for the worse when a boardwalk caricaturist draws them. Suddenly, they’re plunged into a spiral of self-doubt about their bodies and looks. The animation makes their inner critiques visible — Maya’s face becomes rounder and Anna’s nose is longer, for example. It’s clever, while still retaining the empathy and heart that are the hallmarks of PEN15.

Season 2 premiere | Episode 1 | Watch now
The post-apocalyptic drama brings on a slew of new cast members in season 2. The action picks up where it left: with Baba Voss (Jason Momoa) seeking to reunite his family. He’s got ​​stepson Kofun (Archie Madekwe) by his side, but daughter Haniwa (Nesta Cooper) is a captive of Edo Voss (Dave Bautista) — yes, Baba Voss’ brother. The cunning Edo Voss is a Trivantian general who loathes his brother. Meanwhile, Maghra (Hera Hilmar) has returned to her sister, Queen Kane (Sylvia Hoeks), but war looms between the Payan kingdom and the Trivantian Republic.

The Witcher: The Nightmare of the Wolf (Netflix)

Movie | 1 hr 23 min (TV-MA) | Watch now
The Witcher Universe is expanding with its first spinoff. The anime prequel film centers on a witcher named Vesemir (Theo James), whom fans of the franchise will recognize as the person who trained Geralt, the lead of the flagship series. He is a bit of a rogue whose motto may as well be “show me the money.” A live-action Vesemir will show up in The Witcher season 2, played by Kim Bodnia.

Nightmare of the Wolf follows a thread that Geralt mentioned in season 1 — an incident that led to the widespread hatred of witchers. Vesemir takes on a mission to hunt a deadly monster in the woods near the kingdom of Kaedwen. But he makes a pivotal decision that the sorceress Tetra (Lara Pulver) uses to stoke fears about witchers.

The Other Two (HBO Max)

Season 2 premiere | Episodes 1-2 (TV-MA) | Watch now
The comedy about fame was never a huge hit when it aired on Comedy Central, so a lot of people haven’t even heard of it. Now, the show has moved to HBO Max, where I hope it can find more of an audience because it’s genuinely funny. To catch you up, it follows two siblings — gay aspiring actor Cary (Drew Tarver) and former pro dancer Brooke (Heléne Yorke) — after their younger brother, Chase (Case Walker), suddenly become a YouTube-famous singer. Season 2 finds mom Pat (Molly Shannon) bringing in the big bucks as a daytime talk show host. Cary is working as a video host for various outlets, like Bagel Bites TV, and landed a hot boyfriend. Meanwhile, Brooke scours TikTok, looking for a rising star she can manage. Are they famous? Kinda, sorta. Are they happy? It’s complicated.

Movie | 1 hr 44 min (R) | Watch now
Sometimes, you just want to watch funny people doing funny things and Vacation Friends is just that. Lil Rel Howery stars as Marcus, a Type-A executive, who plans to propose to Emily (Yvonne Orji) on their getaway in Mexico. Things go haywire from the start, due to a flood in the room above them. It was caused by Ron (John Cena) and Kyla (Meredith Hagner), a couple who can only be described as extremely extra. As an apology, they invite Marcus and Emily to stay with them, kicking off a weeklong bender. Oh, and the hijinks don’t stop when they leave the resort, because Ron and Kyla end up crashing their wedding seven months later.

He’s All That (Netflix)

Movie | 1 hr 31 min (TV-14) | Watch now
This remake from Mean Girls director Mark Waters takes the premise of the 1999 teen rom-com She’s All That, gives it a gender swap and modernizes it for Gen Z. Padgett (TikTok star Addison Rae) is a high school beauty influencer who suffers a humiliating live-streamed breakup, putting a big makeup sponsorship at risk. Smarting, she makes a bet with a frenemy that will also prove her social prowess to the sponsor: She’ll turn antisocial loser Cameron (Tanner Buchanan), into prom king. Like in the original movie, they fall for each other — but the secret that this was all a bet lurks in the background.

Series premiere | Episodes 1-8 (TV-MA) | Watch now
The perils of viral videos are also explored in this internet thriller. Adrian Grenier plays a seemingly upright family man named Nick, who is kidnapped and filmed by an unknown figure. Nick is forced to hold up cards saying he abuses women and that if the video reaches 5 million views, he will die. Each of the eight episodes focuses on a different person connected to the case, including his frantic sister Pia (Zoe Kazan) and wife Sophie (Betty Gabriel). They grapple with Nick’s actual complicity and frantically search for a way to stop the video from being viewed. All the disparate threads come together to form a (not very) shocking conclusion.

Season 12 premiere | Episodes 1-2 (TV-MA) | How to watch Archer season 12 online
The snarky spy satire returns for a 12th season that sees Sterling Archer almost back to normal. He’s back to doing fairly regular spy stuff, after saving the world at the end of season 11. But he and the Agency undergo a bit of an existential crisis, when a pair of millennial marketers hint that they’re (whispers) old and need rebranding and reinvention. The feeling that Archer has become a dinosaur isn’t helped when he meets rival Fabian Kingsworth, a younger and more spry spy.

Season 6 summer premiere | Episode 8 (TV-PG) | Watch now
Welcome back, Supergirl! The first part of season 6 left off in May, and now the DC show will close out its final chapter. Kara (Melissa Benoist) and Zor-El (Jason Behr) return to National City, where they hope to put the entire Phantom Zone nightmare behind them. That proves more difficult than Kara expected, as she experiences some PTSD while superhero-ing. And her fragile mental state isn’t helped by the fact that Zor-El inadvertently causes a new threat.

Series premiere | Episodes 1-4 (TV-MA) | Watch now
For this heist, let’s put a team together … made of socialites and nannies? OK, sure, why not. This Australian series aired overseas in June and now makes its way to Hulu. Miranda Otto stars as successful businesswoman Sara, who lives in the wealthy suburbs of Sydney. She relies on nanny Evie (Aina Dumlao), who sends money home to the Philippines to support her young daughter. Their lives are upended when they form an unlikely group of women who engage in a heist involving a $16 million necklace.

Documentary | 1 hr 14 min (TV-14) | Watch now
The artist becomes the subject in this documentary about the late star of PBS’ The Joy of Painting. The film starts by chronicling Bob Ross’ rise, from the Air Force to teaching art to hosting a public television show. But the latter part of the movie focuses on the show’s producers, Annette and Walt Kowalski, and their iron-fisted control over his legacy, as well as their bitter battle with his son Steve Ross over the icon’s assets.

Season 3 premiere | Airs Sunday, August 29 at 8 p.m. ET
The best 90 Day Fiancé spinoff returns for a new season of relationship drama. While the flagship series features Americans who are trying to marry their foreign significant others, this version focuses on Americans who move abroad to be with their significant others (hence, The Other Way). Several standouts are back for season 3, including the franchise’s first gay couple, Kenneth and Armando, who are planning their wedding in Mexico. Also back: Jenny and Sumit in India, Ariela and Biniyam in Ethiopia, and Evelin and Corey in Ecuador. There are some new faces, too: Steven and his Russian girlfriend Alina, plus Ellie and Victor in Colombia. The premiere episode is streaming early on Discovery Plus.