8 ways Destiny USA might bounce back: Can laser mazes, musicals and doctors save a struggling mall? 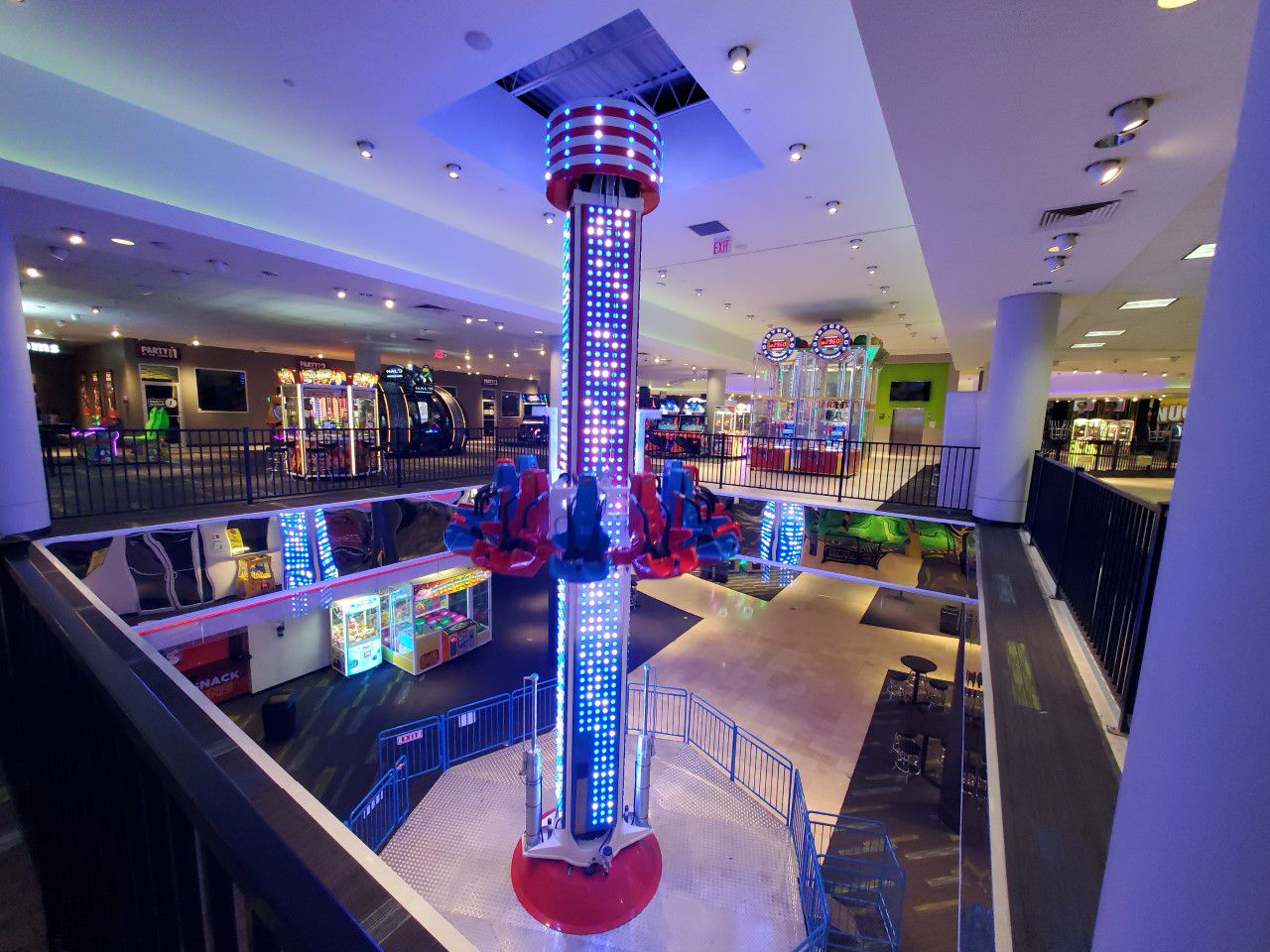 Syracuse, N.Y. – Destiny USA, the largest mall in New York, has a ton of empty space.

The Syracuse shopping mall is the largest mall in New York and one of the largest in the country. But it has lost some of its largest stores, including Best Buy, Sports Authority and three of its four department stores (J.C. Penney, Lord & Taylor and Bon-Ton).

How can Destiny’s owners replace them?

Destiny’s operator, Pyramid Management Group, scored a win recently when Hobby Lobby, one of the largest arts-and-crafts retailers in the country, signed a lease to go into the mall in March 2022. And Destiny’s director of marketing, Nikita Jankowski, said the mall hopes to announce soon another new large tenant.

But traditional retailers are increasingly hard for malls to lure as e-tailers like Amazon grow and consumer preference shifts toward open-air shopping plazas.

Instead, mall operators around the country, hit by similar market forces, have gotten creative in finding new and different tenants.

Destiny is going to need some of that kind of creativity to dig out of its financial hole. The appraised value of the mall has fallen from $700 million in 2014 to just $203 million in 2020. Pyramid is trying to restructure its $715 million in debt on the property.

Pyramid hasn’t been talking about its crisis. But we spoke with retail experts and Destiny’s peers around the country to see how malls are filling their empty space.

Medical providers are always looking to put offices and urgent care facilities close to patients, and a mall such as Destiny would be a perfect fit, said Burt Flickinger III, managing director of Strategic Resource Group, a retail and consumer goods consulting firm in New York City.

While mall leases to clothing stores fell by 10%, leases to medical clinics at shopping malls rose by nearly 60% in the previous two years, CoStar Group reported in 2019.

A Minneapolis-based nonprofit health system, M Health Fairview, operates a walk-in clinic inside the Mall of America in Bloomington, Minnesota.

“We’re working to make the best health care as convenient and accessible as possible for people,” Laura Reed, CEO and chief nursing executive at Fairview, said in 2019. “This new clinic brings high-quality health care much closer to people whether they are shopping, traveling, or working at or near the Mall of America.”

This sector has a name: “medtails.” For health care providers, retail locations offer convenience, speed and lower costs, according to a research report from JLL, a professional services firm that specializes in real estate and investment management.

“Consumers want greater convenience, service and support from their health care provider,” JLL said. “Retail centers are disrupting the existing system by offering locations with more hours of operation, lower fees, and access to a patient base to extended medical services.”

In an ironic twist, Amazon has been buying up empty malls and vacant spaces within malls and turning them into distribution centers. The move has brought new life to struggling malls, who owe much of their troubles to the e-commerce giant.

There is, however, a problem with that happening at Destiny. Amazon just opened two delivery stations in DeWitt, and it’s putting the finishing touches on a mammoth, $350 million distribution center up the road in Clay.

Still, Amazon isn’t the only e-commerce company out there.

But it would do well to try even more entertainment attractions, according to Ray Wimer, a professor of retail practice at Syracuse University’s Whitman School of Management.

Entertainment attractions have a big advantage for malls. They must be experienced in person, so they don’t compete with online retailers.

And, unlike a warehouse or distribution center, they complement traditional retail tenants, who benefit from its spillover effect, Wimer said.

Come for the fun, stay for the shopping.

“If you make it warehouse space, that’s not going to bring people in,” Wimer said. “Entertainment generates customer traffic, and that assists traditional tenants.”

Scene75 says the attraction, which opened in October 2019, is the largest indoor entertainment center in the country.

“We really turned it into a super-unique space,” said Maggie McCartney, director of marketing and branding. “I think it’s our most beautiful location.”

She said the Simon Property Group-owned mall was eager for someone to fill the two-story former Macy’s.

Building an entertainment center in a former department store does present challenges.

Scene75 had to have extra supports to carry the weight of the go-kart track on the second floor. To fit in the drop tower, it had to cut a big hole in the store’s second floor. The store’s marble flooring – not your typical flooring for an entertainment center – was kept after Scene75 decided it would be too expensive to remove.

“It’s good for us because people were already going to the mall,” she said. “There may be less traffic than it used to have, but it’s still traffic.”

The entertainment center is just the kind of experiential attraction the mall needed, she said.

“People still want to go out and do something that’s an experience,” McCartney said. “It has to feel more like an enjoyable experience.”

After years of declining occupancy, the Northgate Mall in Seattle, one of the nation’s oldest malls, is being reshaped nto a walkable, mixed-use center with 1,200 residential units, 129,000 square feet of retail and restaurant space, a 110,000-square-foot hotel, 804,000 square feet of new offices, three ice rinks and a 500-stall parking garage. Work recently began on the $500 million, multi-year project.

Doing something as ambitious at Destiny is unlikely, since it would require a complete redevelopment of the mall, including demolishing parts of it. While the mall is struggling, it’s not at the point where a complete re-do is necessary, Wimer said.

Pyramid, however, has proposed a mixed-use development next to its Crossgates Mall in Guilderland. Plans call for 222 one- and two-bedroom apartments in five buildings, along with buildings containing retail and office space.

And Pyramid opened a 209-room Embassy Suites across Hiawatha Boulevard from Destiny in 2017. So, technically, all it needs to do to make the mall a mixed-use development is add a residential component and offices.

Flickinger said empty mall space could easily be converted into a venue for esports tournaments, where large groups of professional and amateur video gamers compete for cash prizes.

“While they’re playing, it’s very popular to sell tickets for fans to watch,” he said. “Put in a video gaming contest theater where video game enthusiasts and championship players can compete with one another in live time and other people can watch.”

It’s happening at other malls.

Simon Property Group, the nation’s largest owner of malls, is investing $5 million in the entertainment company Allied Esports, part of a deal in which Allied will create 10,000- to 15,000-square-foot esports lounges at up to 12 Simon malls for competitive video game events.

The Mall of Georgia in Buford, Ga., will hold the companies’ first dedicated esports venue.

“Allied Esports’ new esports facility is a perfect complement to the mix of shopping, dining and entertainment options at Mall of Georgia,” said John DiCioccio, the mall’s general manager. “Our guests enjoy experiential offerings, and this new concept is certain to become a fast favorite among those who visit the center.”

Malls are typically filled with national retailers. But with fewer of those around, Flickinger said, Destiny should dedicate space for local merchants.

A similar feature at the Mall of Dubai, the world’s biggest and highest volume shopping mall, features selling stations for hundreds of local merchants and has proven popular, he said.

“Destiny could have a flexible format area for the local merchants to sell, especially the craftsmen and artisans selling homemade clothes, fine and fashion jewelry and sporting goods,” he said.

The health club industry took a big hit during the coronavirus pandemic. Of the 40,000 that existed in the U.S. before the pandemic, 6,800, or 17%, permanently closed by the end of 2020, according to the International Health, Racquet & Sportsclub Association.

But the association said it expects the industry to recover, with surveys showing 94% of gym members plan to return to their workouts.

“The benefits to centers are clear,” the firm said in a recent report. “Fitness centers bring in a steady flow of consumers, increasing traffic to the center. In fact, 47 percent of consumers are motivated to visit a shopping center if it has a fitness or wellness tenant.”

“Ourselves and others are looking to Broadway and live entertainment,” he said. “There’s some really interesting stuff with living stories — live acted, tech-enhanced experiences in the immersive environments. We’ve got one that will be hopefully hitting the market next year, and we know a lot of other players that are looking at that kind of thing. Live-action roleplay storytelling stuff.”

The advantage of live theater to malls is obvious. Movie theaters must compete with home streaming services, but live theater is best experienced in person.

“There’s still something about being near real actors doing real acting, live,” Bredberg said. “It’s really going to be a fun time. I think we’re in this great age of all kinds of really talented folks looking at taking advantage of this vacated mall space and coming up with all new solutions.”

No matter what mall owners put in their empty spaces, their success will depend on how well they can lure people out of their homes, said Michael Goldman, who leads the Entertainment Licensing Group at StoneCreek affiliate Adventure Entertainment Cos.

“The key is that you need to get people off their sofas and to whatever your vendor or location-based entertainment is,” he said. “And it’s tough sometimes, when you have difficult economics, to make that work.”

Got ideas for how Destiny can fill its empty space? Email them to Rick Moriarty at [email protected] and we may include them in a future story.