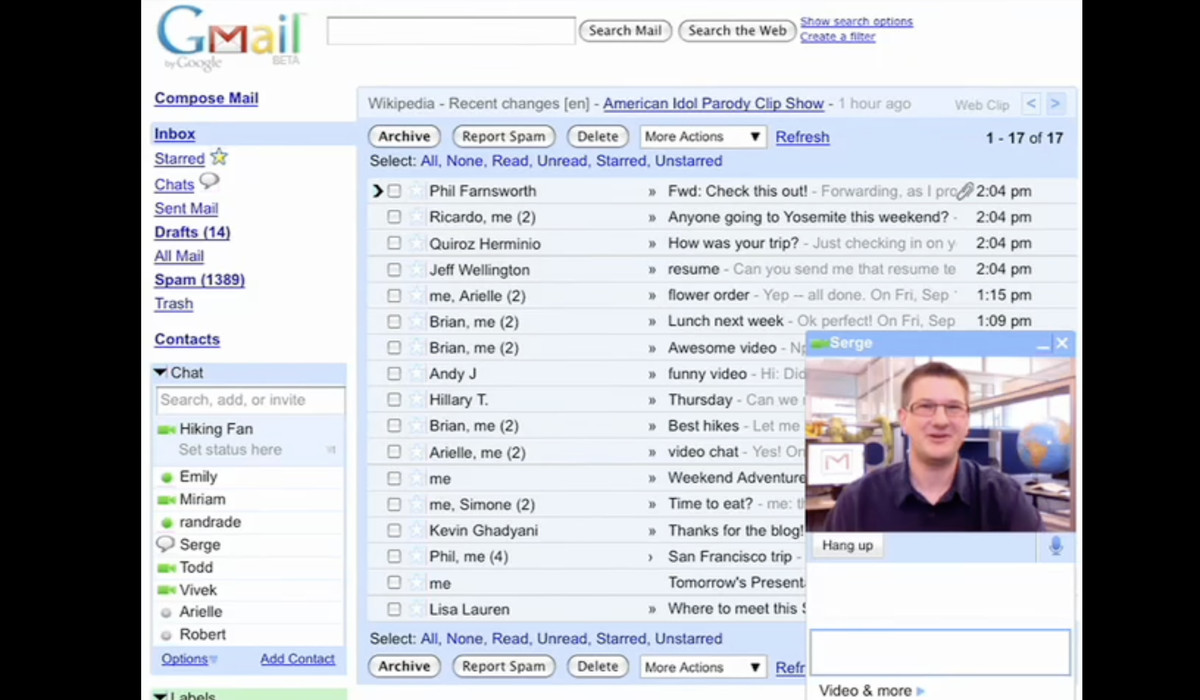 Over the past 15 years, Google has introduced more than a dozen messaging services spanning text, voice, and video calling. This week, the company’s efforts culminated in the general availability of Google Chat, a combination of Slack / Discord-style rooms with more traditional messaging.

It’s the sort of announcement that might have been expected to bring some consistency to the company’s muddled messenger messaging, but — as is traditional for Google in this area — there’s plenty of confusion to go around.

For one thing, Google Chat is the name fans have affectionately used to refer to Google’s original messaging service, Google Talk, for many years. Is this a coincidence that brings Google’s messaging ouroboros full circle, or is it meant to entice GChat fans into actually using the company’s latest attempt?

For another, Google Chat contains its own messaging rooms that were previously called Rooms but will soon “evolve” into something called Spaces, even though Google introduced a different messaging app called Spaces in 2016.

Here’s a breakdown of Google’s major messaging offerings over the years, with currently active services in bold:

Within that mess of product names are two core issues: Google’s apparent love of launching new services and its inability to combine products under one umbrella.

Competitors like WhatsApp demonstrate what the opposite approach could be: a chat service tied to a user’s phone number that allows for video and voice, all from one app. Or there’s Apple’s iPhone approach, which ties email addresses and phone numbers to two services: iMessage for text and FaceTime for audio and video.

Google keeps falling into the same cycle, though, one that has repeated itself throughout the years. It’ll build out new services, integrating them into more areas of its product lineup, then try to wipe the slate clean, launch new services that (eventually) replace the old set, and start the cycle anew.

Here are the four eras of Google messaging so far:

August 2005: Google Talk launches, kicking off Google’s foray into messaging services. In addition to instant messaging, Talk also offered voice calls through its desktop client. Talk would be integrated into Gmail in 2006 as the sort of “AOL Instant Messenger” to Gmail’s “AOL” email service. Found in the “Chat” window in Gmail, users wind up calling it GChat.

October 2008: Google launches Android for smartphones, with support for both Google Talk and regular SMS texting.

November 2008: Google Talk is added to Gmail with voice and video chat.

March 2009: Google Voice launches. A rebrand of an existing company called GrandCentral that Google bought in 2007, Google Voice lets users sign up for a single phone number that can send and receive text messages and calls on both PCs and phones. Google Voice and Google Talk remain separate services.

May 2009: Google Wave is announced at Google I/O. Pitched as a grand vision for the future of internet communication, Wave reimagined email and chat as a series of grouped threads with different users until Google stopped development a year later. While overall a flop, Wave is now seen as a precursor to team messaging apps like Slack.

February 2010: Google launches Google Buzz. It’s primarily a microblogging service like Twitter that lives inside Gmail, but it also offers private messages you could send to small groups. It was discontinued in 2011 to make way for Google+.

April 2010: Google adds chat to Google Docs. The new chat feature is designed to let document editors communicate with each other while editing a document, but it’s separate from Google’s other chat services.

It’s the first part of Google’s messaging cycle: the introduction of new services, even though it’ll take two years for Google to finalize the branding and strategy here.

July 2012: Google launches Hangouts in Gmail, calling it a more “modern” version of the existing video calling feature that Gmail had offered through Google Talk. Already, we start to see the second part of the cycle, as Google starts to build out Hangouts into its other services.

September 2014: Google Voice is integrated into Hangouts, continuing Google’s efforts for a cohesive messaging system and bringing some SMS support.

April 2015: Google Fi launches as Project Fi. Google’s phone plan also integrates with Hangouts but leads to headaches with Google Voice, given that the two services exist side by side.

June 2016: Google Talk for Android and Gmail (still not officially named GChat or Google Chat, despite what most people call it) is discontinued, marking the end of Google’s original messaging service.

May 2016: Google starts its cycle again at Google I/O 2016, announcing both Allo, a new texting app, and Duo, a new video chat application. Both are separate from Hangouts, muddying the waters once again.

March 2017: Google announces Hangouts is being rebranded as Hangouts Chat, with a new focus on enterprise use. Google also launches Hangouts Meet, an enterprise-friendly videoconferencing app that later becomes Google’s answer to Zoom. Allo and Duo are expected to take the place of Hangouts as the new consumer options for messaging and video chat.

April 2018: Google “pauses investment” in Allo, focusing instead on RCS, a new standard to replace SMS. Confusingly, Google uses the phrase “chat services” to refer to enabling RCS on Android, despite being unrelated to Google Talk (commonly referred to as GChat) and Hangouts Chat / Google Chat.

May 2019: Google actually shuts down Allo.

With Google’s mobile messaging focused on RCS, the company comes back to Hangouts as its old-new web-based service for communication. But in a twist, the COVID-19 pandemic puts enterprise communication tools like Slack and Zoom front and center — not just for companies, but for the everyday life of people to use for socializing, school, and more.

April 2020: Hangouts Chat (which has steadily grown into a Slack / Discord-style app during the previous era) is renamed to Google Chat — marking the return of sorts of the Google Chat name, although the slow rollout might mean you still have Hangouts lurking in your Gmail browser window.

June 2021: Google releases Google Chat to all customers and announces that “Rooms” will become “Spaces.” Spaces work similar to a Slack or Discord room, offering a central place for larger group discussions compared to regular group threads — which still exist in Chat, too.

It’s been a long road to get here, but with the launch of Workspace and Google Chat to non-enterprise users, it’s almost possible to see Google’s strategy. Gmail exists for emails; Chat is the GChat / Hangouts-style messaging system for real-time conversations and group chats; Spaces is the Slack / Discord-style area for more persistent, larger rooms based on a particular topic or conversation; and there’s Meet for video chats.

Mobile messaging is messier, though, with Google having spent years trying to get its own services to work side by side with carrier technologies like SMS and RCS — and there’s no end in sight. Working with cellular carrier technology to pursue Apple and WhatsApp isn’t a terrible idea, but it’s not clear whether Google can actually manage to catch up.

Even if RCS might be a strong contender to replace SMS, it doesn’t connect to the web-based Google Chat at all — even though, confusingly, Google refers to RCS services as “chat” as well. And on the video front, it’s not clear why Google Duo still exists following the broader release of Hangouts Meet since the two largely accomplish the same things.

If anything is clear in 2021, it’s that Google’s messaging future will likely remain muddled for quite some time.

We do terrific travel