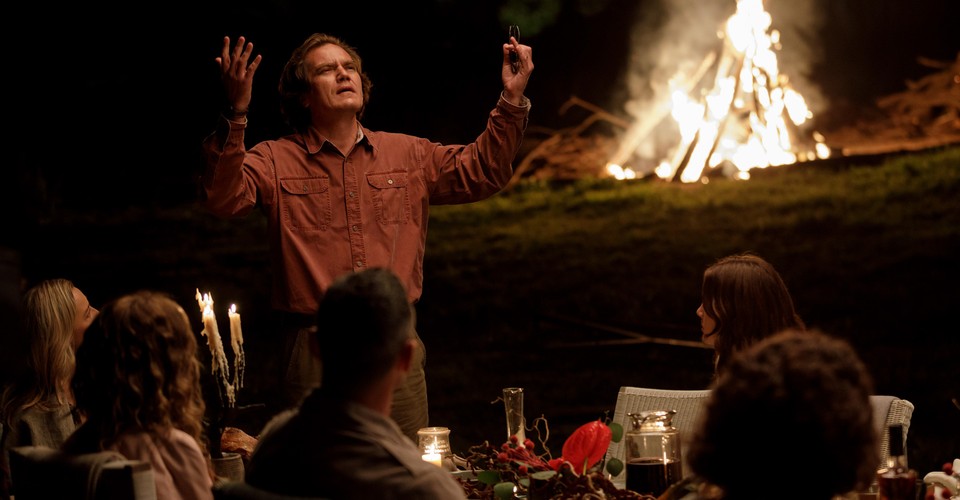 The defining motif of Nine Perfect Strangers, David E. Kelley’s new miniseries on Hulu, is an image of fruit being pulverized into gloop, which is also how my brain felt after watching the first six episodes. Like HBO’s Big Little Lies, the show is adapted from a novel by Liane Moriarty, and its setup—a self-help and wellness retreat goes very wrong—seems irresistible. But stylistically, something is off. What your blender does for a farmers’-market haul, Kelley and his co-creator, John-Henry Butterworth, have managed for genres: The series, as it cycles through satire, horror, and prestige psychodrama, can’t quite decide whether the wellness industry is a virulent scam or a desperately needed curative for broken souls.

Nine Perfect Strangers is an entry in the emerging genre of wellness horror, in which a group of wealthy, miserable people who are paying silly amounts of money to feel better about themselves ends up instead in a spa-weekend version of Dante’s Inferno. The recent HBO show The White Lotus took a ruthlessly sociological approach to the model, skewering the toxic privilege of a group of vacationers in Hawaii like sharks in a barrel. The 2017 Gore Verbinski cult film A Cure for Wellness imagined an overworked Wall Streeter going missing at a mysterious Swiss health resort plagued by secrets and lots and lots of eels. In Nine Perfect Strangers, some varyingly troubled individuals arrive at a California retreat led by a spiritual healer whose intentions are as spotty as her Russian accent. Nicole Kidman’s Masha, a cursed Barbie doll in a diaphanous wig and last year’s prairie dresses, blinks furiously as she presides over the ritualistic excavation of people’s pain. There are sweat lodges and hot springs and trust exercises and primal screaming. There are revelations. There is definitely something a bit off about the smoothies.

The topic of wellness has never been more urgent, more fraught, or more subject to exploitation by unscrupulous “healers.” But the show doesn’t seem to know what it wants to say about it. As with Big Little Lies, Kelley seems to have profound sympathy for his wounded, privileged characters, and deftly fetishizes the luxury of their surroundings without undermining their sadness. The cast, helpfully, is a veritable gift basket of goodies. Michael Shannon plays Napoleon Marconi, the Ned Flanders–esque patriarch of a grieving family, with Asher Keddie as his near-catatonic wife and Grace Van Patten as their daughter. Undefeated by tragedy, Napoleon is an everydad in white socks and sneakers who describes his breakfast as a “big yum-yum” and his surly fellow retreaters as “the Bickersons.” He seems uniquely irritating to the rest of his group, including Melissa McCarthy as Frances, a depressed romance novelist; Regina Hall as Carmel, a schlubby divorcée; and Bobby Cannavale as Tony, a self-described “run-of-the-mill asshole” in more pain than he lets on.

The most crucial character, though, is Masha, a supposed spiritual healer who has a checkered history. In Moriarty’s novel, Masha is otherworldly, “a supermodel. An Olympic athlete. At least six feet tall, with corpse-like white skin and green eyes so striking and huge they were almost alien-like.” In the show, the nine guests gossip about her methods: Lars (played by Luke Evans), a sarcastic writer with undisclosed intentions, observes that Masha curates her groups for maximum oomph, to “complement each other’s demons”; Frances describes her as “an amazing, mystical Eastern Bloc unicorn.” Like all good cult leaders, Masha is supposed to be enigmatic. But the biggest failing of Nine Perfect Strangers is how unrecognizable she is as a human. She’s less a healer than a ghost, sliding into people’s rooms at night to whisper into their dreams. Her motivations in the first six episodes are opaque: You’re never sure if she’s ruled by money, power, or truly altruistic instincts. The overarching mystery of the show is the identity of the person texting Masha death threats; her only response—and her only consistent display of emotion—is the minutest elevation of an eyelid.

Wellness horror requires a difficult dance of balancing cynicism with empathy. Inevitably, the holistic meal plans and inner-child discovery will descend into carnage, which requires the movie or show at hand to be distrustful about the nature of its spiritual leader. And yet for the audience to be fully on board, we have to truly connect with the pain of the characters trying to get well in the first place. I found The White Lotus deeply satisfying as social satire, but became frustrated with the way it kept most of its characters at arm’s length. (Tanya, played by Jennifer Coolidge, and her breathy, exorcising cries of “Mother!” were the exception.) Midsommar, Ari Aster’s trippy, incandescent horror film about a grieving woman (Florence Pugh) who inadvertently accompanies her boyfriend to a Swedish festival of human sacrifice, committed fully to the idea that something can be transformative and utterly monstrous at the same time. Catharsis and healing, it argued, can come at a terrible cost.

Read: We choose our cults every day

Nine Perfect Strangers connects only occasionally with its characters as human beings. Frances lightly disguises her loneliness with sarcasm and an array of silk cover-ups. The Marconis’ shared pain can feel devastating. Others, such as Carmel and Samara Weaving’s Jessica—an Instagram influencer with a troubled marriage and body-image issues—aren’t given the substance to feel like more than archetypes. The show is savvy enough to sense how easily human ache can fall prey to the manipulative language of certain practitioners, and how alluring psychobabble can be, in the right context. Masha preaches the virtue of seeking an “extraordinary, exceptional life,” and describes the power of getting “free of the negative habits and chemicals and toxins and thoughts” that once held her back. A sharper show might have mined this space between wellness and wellness culture, between actual health and the exploitation of “health” as an idea, a magical panacea. There are subtler ways to explore the chaotic frazzle of modern life than through the violent synthesis of superfruits in a blender.