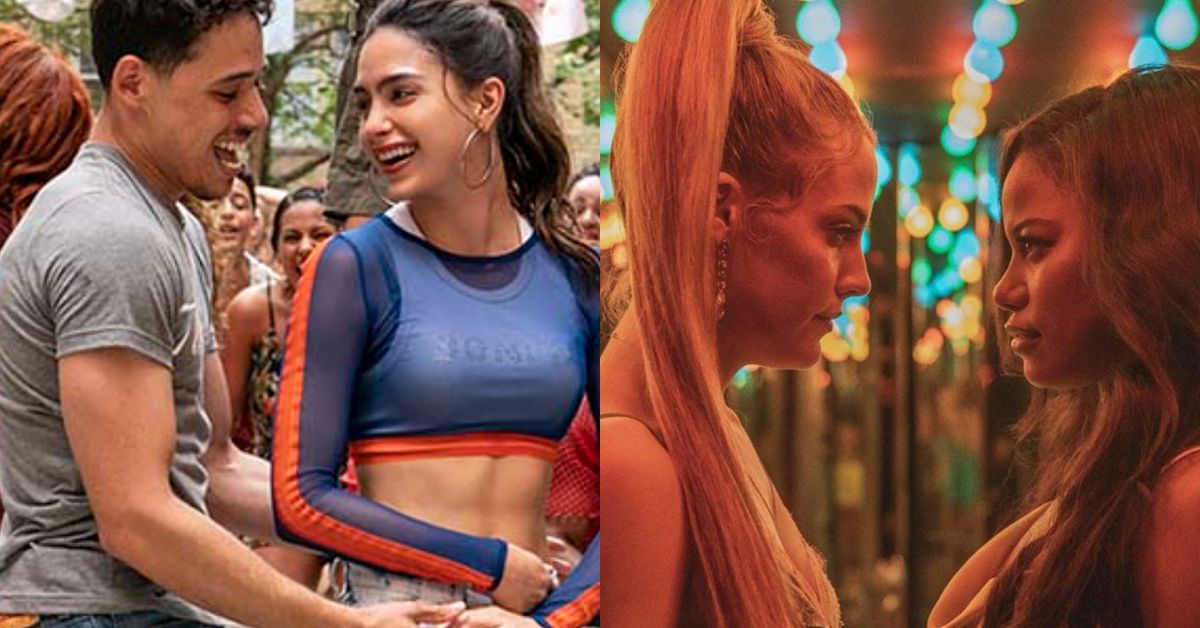 Movies are back in full force this summer, and June feels like the month the floodgates break. There’s action comedies! Experimental documentaries! Sexy European romantic tragedies! Horror flicks! In the Heights is coming out and so is Zola. Plus a new Pixar movie and an animated film about a chainsaw-wielding George Washington leading a team to fight Benedict Arnold. Get ready, friends.

Here are a dozen of June’s most interesting films to look for in theaters or on streaming platforms.

We undeniably live in a surveillance society. Cameras are ubiquitous, from body cameras on cops to drone-enabled cameras that capture views from above to the phone cameras we hold in our hands every day. But what do cameras miss? Do they really give us a more objective view of reality? Those are the questions Theo Anthony (Rat Film) tackles in All Light, Everywhere, a sprawling essay film about “blind spots” in the technologies we trust (or don’t trust) to keep us safe and the illusions they too often depend upon. Watching All Light, Everywhere is informative, but more importantly, it’s an experience — and a sobering one.

How to watch it: All Light, Everywhere will premiere in theaters.

The Conjuring: The Devil Made Me Do It

The latest installment in the Conjuring universe (and a direct sequel to 2016’s The Conjuring 2) returns to paranormal investigative couple Ed and Lorraine Warren (Patrick Wilson and Vera Farmiga). The Warrens were real people, and just like other movies from the series, this one draws on their files for its source material. Some of the story in The Conjuring: The Devil Made Me Do It is expected — a little boy exhibits weird behavior, and the Warrens are convinced it’s a case of possession. But the film also covers the first court case in US history in which a murder suspect used demonic possession as a defense. If the previous Conjuring films are any indication, The Devil Made Me Do It will be taut and spooky.

How to watch it: The Conjuring: The Devil Made Me Do It will premiere in theaters and stream on HBO Max.

Christian Petzold, one of Europe’s greatest living filmmakers (Transit; Barbara), returns with Undine, which transports an ancient mythological creature into the present day. In European mythology, an “undine” is a water nymph who falls in love with a man, but will die if he is unfaithful to her. In Undine, a (modern-day) historian who studies the urban development of Berlin falls in love with a man, but he betrays her — and she must kill him and return to the water. It’s stylish, passionate, and full of enchantment.

How to watch it: Undine will premiere in theaters.

In the Heights is poised to be the smash hit of the summer — and that would probably be true even if it wasn’t perfectly timed to welcome moviegoers back to theaters after a long pandemic year. Lin-Manuel Miranda’s (pre-Hamilton) musical was a hit on Broadway, and now it’s been translated to the big screen by Crazy Rich Asians director Jon M. Chu. Starring a bevy of talent — Anthony Ramos, Corey Hawkins, Leslie Grace, Melissa Barrera, Olga Merediz, Daphne Rubin-Vega, Gregory Diaz IV, Stephanie Beatriz, Dascha Polanco, Jimmy Smits, Marc Anthony, and Miranda himself — it’s a joyful, music-filled story about a community pulling together and their dreams of a better life.

How to watch it: In the Heights will open in theaters and on HBO Max.

As you may have deduced from the title, Hitman’s Wife’s Bodyguard is a sequel to the 2017 comedy The Hitman’s Bodyguard, in which Michael Bryce (Ryan Reynolds) must protect hitman Darius Kincaid (Samuel L. Jackson) from a bunch of pretty bad dudes. Everyone’s back for the new film, including Darius’s wife Sonia (Salma Hayek), who drags Bryce — who’s been on a sabbatical, at his company’s insistence — back into the fray. Will it be kind of stupid? Probably. But Jackson, Reynolds, and Hayek all have proven comedy chops, so it’s also likely to be the platonic ideal of a mindless summer blockbuster.

How to watch it: Hitman’s Wife’s Bodyguard will open in theaters.

Pixar’s latest is set in the Italian Riviera, a place I’d give my eyeteeth to vacation in right about now. The film is a coming-of-age story about a kid named Luca, who’s about to have the best summer of his life in Italy. He meets another boy and they become fast friends. But Luca has a secret: He’s actually a sea monster. What? I don’t know, but it sounds fun to me.

How to watch it: Luca will premiere on Disney+.

Rita Moreno: Just a Girl Who Decided to Go For It

Living legend Rita Moreno is one of the most highly decorated actors in American entertainment, and her success spans decades: Her first major award was the Best Supporting Actress Oscar for West Side Story in 1961. (She’s also one of the few actors to ever accomplish the elusive EGOT — Emmy, Grammy, Oscar, Tony.) But more importantly, she’s an absolute icon, a woman who blazed trails for Latinas — Moreno is from Puerto Rico — with determination, commitment, and skill. In this documentary, she tells her story, from the good times to the hard times, and it is absolutely delightful.

How to watch it: Rita Moreno: Just a Girl Who Decided to Go For It will premiere in theaters.

French director François Ozon makes entertaining, passionate melodramas, and Summer of 85 is no exception. The drama — which premiered at the virtual Toronto International Film Festival last fall — is about a 16-year-old named Alexis (Félix Lefebvre), who is spending his summer at a seaside resort in Normandy. He meets David (Benjamin Voisin), and they fall into a relationship that quickly becomes a romance. But tragedy is always lurking around the edges. Summer of 85 is a coming-of-age story, and if you’re up for some sexy French summer fun and emotional implosions, this is it.

How to watch it: Summer of 85 will premiere in theaters.

You don’t go see a Fast & Furious movie for the plot; you go for the cars and the camaraderie, and that’s what F9 promises to serve up as well. Directed and co-written (with Daniel Casey) by Justin Lin, who also made Fast & Furious 6, F9 has been delayed several times due to the pandemic. But now it’s here, with a stacked cast: Vin Diesel, Michelle Rodriguez, Tyrese Gibson, Chris “Ludacris” Bridges, John Cena, Jordana Brewster, Nathalie Emmanuel, Sung Kang, Helen Mirren, and Charlize Theron. Presumably, there will also be really cool stunts.

How to watch it: F9 will open in theaters.

Broad City’s Ilana Glazer co-wrote False Positive with director John Lee, and it’s a spin on Rosemary’s Baby. Glazer plays Lucy, who has been trying to get pregnant with her partner Adrian (Justin Theroux), with little success. Then they find a fertility doctor they love, Dr. Hindle (Pierce Brosnan), and hopes run high. But when Lucy becomes pregnant, she starts to suspect something is afoot with Dr. Hindle and sets out to investigate. A spooky horror film about pregnancy? Sounds great to me.

How to watch it: False Positive will premiere on Hulu.

I am reasonably confident that Zola (which premiered at Sundance in 2020) is the first movie based on a Twitter thread, and it is a humdinger. In 2015, dancer A’Ziah King — who goes by Zola — told the story, in 148 tweets, of a strange but true trip to Florida with a girl named Stefani; the trip went terribly, terribly wrong when King discovered Stefani’s “roommate” was actually her pimp. King later admitted that some parts of her account were exaggerated, but Zola director Janicza Bravo is less interested in facts than she is in crafting an entertaining tale and exploring how our perceptions of the characters are affected by who’s telling the story. It’s wild, raunchy, and very funny, with a cast that includes Riley Keough, Colman Domingo, Nicholas Braun (a.k.a. Succession’s Cousin Greg), and a marvelous Taylour Paige, plus a screenplay co-written by Bravo and Slave Play writer Jeremy O. Harris.

How to watch it: Zola will open in theaters.

This movie sounds very wild, which is probably the idea. It’s kind of a revisionist history of America, helmed by Archer executive producer Matt Thompson; George Washington (voiced by Channing Tatum, who’s also one of the film’s producers) leads a team to take on Benedict Arnold and King James, and Washington, uh, wields a chainsaw? Phil Lord and Christopher Miller of Lego Movie fame are among the film’s producers, and the voice cast is full of top-flight talent, probably because everyone’s been stuck in lockdown for a year. In addition to Tatum, listen for Simon Pegg, Judy Greer, Bobby Moynihan, Amber Nash, Killer Mike, Andy Samberg, Jason Mantzoukas, Olivia Munn (who, I need to point out, is playing Thomas Edison), Raoul Max Trujillo, Will Forte, and more. The film is slated to come out just before the July Fourth weekend, so I guess it’s time to celebrate.

How to watch it: America: The Motion Picture will premiere on Netflix.