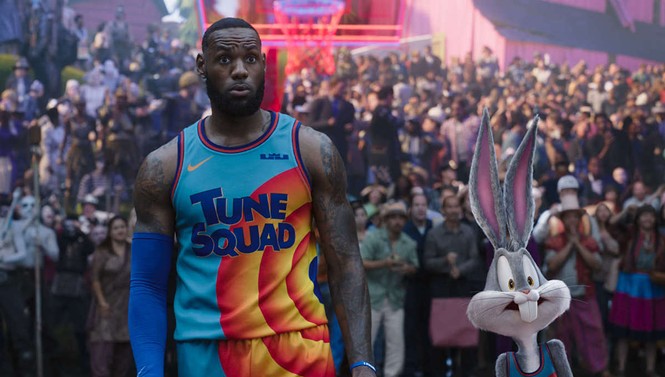 Can I Bring It: Bill T. Jones and D-Man in the Waters ****
See feature review. Available July 16 via ParkCityFilm.org; available July 23 via SLFSatHome.org. (NR)

Gunpowder Milkshake **1/2
When a movie feels like deliberate pastiche of a dozen other popular movies, it seems like the best you can hope for is a few transitory pleasures. And that’s more or less what you get from director Navot Papushado and co-writer Ehud Lavski in this blood-soaked action thriller about a super-assassin named Sam (Karen Gillan) who finds herself taking care of an 8-year-old girl (Chloe Coleman) while trying to survive the many, many dudes trying to kill her for various and sundry reasons. The story borrows liberally from the John Wick series template of underworld-building, including a “library” staffed by badasses (Michelle Yeoh, Carla Gugino and Angela Bassett) and various venues where a “no guns allowed” policy is understood. There’s also an attempt at emotional depth in juxtaposing Sam’s involuntary surrogate-motherhood with her issues with her own estranged mother (Lena Headey). Mostly, though, it’s a slightly-above-average spin on a dozen other Tarantino clones from the past 30 years, capitalizing on its killer cast and creatively-staged bits of mayhem like a sequence where Sam has to fight with two temporarily anesthetized arms. A handful of fresh twists can at least provide temporary distraction from the sense that there’s nothing new under the sun. Available July 14 via Netflix. (R)


I Carry You With Me **1/2
On the one hand, director Heidi Ewing deserves acknowledgement for attempting a unique hybrid of dramatic narrative and documentary storytelling; on the other hand, I’m not sure it actually works in this case. The fact-based story begins with actors playing the principal roles of two lovers in 1994 (and not gay-friendly) Mexico: Iván Campos (Armando Espitia), an aspiring chef, and Gerardo (Christian Vazquez), a schoolteacher. Ewing and co-screenwriter Alan Page wind their way through the complications in their relationship, from familial expectations to a lengthy separation when Iván decides to try his fortunes in New York (including a harrowing illegal border crossing). While there are powerful moments in that journey, including how their respective fathers react to their sons’ sexual orientation, Ewing and Page clearly stick so close to actual events that dramatic structure is sacrificed. And by the time I Carry You With Me reaches its present-day conclusion—with the actual Iván and Gerardo playing themselves—the filmmakers seem to abandon any attempt to resolve many of the conflicts that have been introduced. For anyone who watches a film based on a true story and complains “it didn’t actually happen that way,” here’s an example of why a movie has different dramatic requirements than a real life. Available July 16 in theaters. (R)

Pig ***1/2
Writer/director Michael Sarnoski’s quirky little drama starts off in a way that suggests a very different direction from the one it ultimately takes. His protagonist is Robin Feld (Nicolas Cage), a recluse living alone in the Oregon woods with his truffle pig, bartering his product to Amir (Alex Wolff), a middleman selling the truffles to high-end Portland restaurants. Then thieves assault him and kidnap the pig, sending Robin on an odyssey into Portland to recover the animal. Along the way, Sarnoski parcels out information about Robin’s pre-hermit history; the threatened-pet element, a weird underground fight club and the way Robin’s name is spoken in hushed tones hint at a kind of John Wick of the culinary world. Ultimately, however, Pig gives both Robin and Amir arcs that play with the collision between pretentious foodie culture—including a great scene where Robin psychologically breaks down a chef who creates dishes featuring huckleberry foam and pine smoke—and the simpler, Ratatouillle-esque link between food, love and memory. The result might make some of the stranger storytelling detours feel out-of-place, but the performances and Sarnoski’s sharp, patient direction make this a quest narrative with more of an emotional kick than a physical one. Available July 16 in theaters. (R)

Roadrunner: A Film About Anthony Bourdain ***
There’s an unsettling quality to the way director Morgan Neville takes advantage of his access to so much archival footage and voice-over narration featuring the late chef/author/TV personality Anthony Bourdain, as though he were speaking to us from beyond the grave. An attempt at understanding what he might be trying to say is at least part of what’s going on here, as Neville focuses on the years of Bourdain’s public life—from the publication of his best-selling memoir Kitchen Confidential in 2000 to his suicide in 2018—rather than attempting a cradle-to-grave biography. Interviews with friends and colleagues provide context for the copious footage of Bourdain himself from his various TV series (plus behind-the-scenes footage and outtakes), exploring how his addictive personality informed every part of his life. As simple character study, it’s consistently engrossing in exploring the ways Bourdain struggled with being a celebrity and with whatever undiagnosed conditions drove him. But while Neville flirts with exploitation once he begins asking interview subjects about Bourdain’s death, he does provide a surprisingly heartbreaking portrait of people left behind after a suicide, wishing a voice from beyond could answer unanswered questions. Available July 16 in theaters. (R)

Space Jam: A New Legacy *
There have been far worse movies created than Space Jam: A New Legacy, but it might represent the pinnacle of a particularly loathsome brand of audience-pandering garbage. It’s pretty pointless attempting to summarize the premise—something to do with a computer algorithm (Don Cheadle) that has attained self-awareness inside the Warner Bros. Studios server, and wants LeBron James (himself) to do … something, who the fuck knows—because it’s just a thin framework for the rat-a-tat parade of references involving not just the Looney Tunes characters, but virtually every recognizable piece of intellectual property owned by WB. Sure, the cadre of credited writers occasionally stumbles upon a decent joke, or a cross-pollination of cartoon characters and other movies that doesn’t make you want to gag. The whole enterprise is just so profoundly cynical, a parade of “I understood that reference” bits that doesn’t ever feel remotely affectionate towards the characters it trots out, as evidenced by turning Bugs, Daffy & company into CG versions of the 2D icons. More baffling still, the story ultimately revolves around a contentious relationship between LeBron and his adolescent son (Cedric Joe), as though anyone could possibly care about the hoop star’s emoting skills and a tender moment of reconciliation amidst the self-aware anarchy. This is what happens when you let the grade-school focus group from the “Poochie” episode of The Simpsons make decisions about making a movie. Available July 16 in theaters and via HBO Max. (PG)

Witches of the Orient **
Documentaries don’t often take aesthetic risks, so it’s a bummer that French filmmaker Julien Faraut’s unusual choices nearly always undercut what should have been a foolproof subject. That subject is the Nichibo Kaizuka women’s volleyball club of 1950s/1960s Japan, made up of employees at a textile factory, and which became such an international powerhouse that they were dubbed “The Witches” for their almost supernatural performance. Faraut drive home the point that there was nothing supernatural about the grueling practices they put in, though he does so in a way that proves pretty grueling itself—showing archival footage of their drills over and over and over again in a way that simply grows tedious. And many of Faraut’s other decisions prove similarly frustrating: sporadically intercutting footage of volleyball-themed anime while waiting too long to explain its context; getting interviews with the surviving team members, yet letting voice-overs run over dull footage like one of them playing games with her grandchildren; losing track of the team entirely for a long sequence emphasizing Japan’s post-war emergence as a manufacturing power. The film recovers somewhat for a finale showcasing the 1964 Olympics gold medal match vs. the Soviet Union, edited for some genuine tension and capturing the women’s amazing skills. By that point, it has also wasted a lot of time on distractions from a great real-life story. Available July 16 via SLFSatHome.org. (NR)